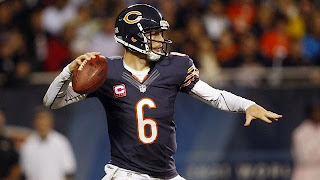 If you haven’t heard, Jay Cutler has renewed his contract with Chicago Bears. True, the new contract involves a lot of numbers, and let me tell you – pretty big ones at that, but interestingly and to our surprise, the breakdown of these big numbers have reached the Internet pretty fast. A lot probably know about Cutler signing a contract of seven years for $126 million, but thanks to “a source with knowledge of the deal,” we can now look beyond these two numbers we have!

Excluding for the bonus for signing, it’s pretty much $22.5 million for 2014, $15.5 million for 2015 and $16 million for 2016. That’s $54 million for three years, and mind you, these are only the portions that are guaranteed. These are the base salaries only, meaning they could increase to larger figures (if that’s even possible) for Mr. Cutler!

The last four years of the contract are as lovely – from 2017 to 2020, salaries are $12.5 million, $13.5 million, $17.5 million and $19.2 million respectively. These years, however, are not yet guaranteed. In essence, before these seasons, the Bears could opt to part ways with Jay Cutler if they wanted without being in debt to him at all.

While the sum total of the numbers mentioned above isn’t $126 million, the $10 million short is in the form of incentives. If Cutler gets to be part of the active roster, he will get more than $150,000 each week – if he consistently gets that for four years, that’s more or less $10 million additional.

If you are wondering why the Chicago Bears decided with this contract, it’s mostly because it gives the team and Phil Emery flexibility. If Cutler has to be stuck out, he can be as long as it’s after the three guaranteed years. Each year after 2016, their quarterbacks can be assessed and totally renewed with younger players.

Now according to the team’s general manager, what’s not broken doesn’t need fixing, so why should Cutler be replaced when he is still ranked eighth in the National Football League? That’s pretty big in the football world!

As for Cutler, of course it’s probably the figures that attracted him the most. The first few years of the deal are excellent, and he’ll probably still be a starter in those years considering the salaries. Also, the Bears are very strong in the league, and after his beautiful stats under Marc Trestman, it seems pretty wise to stay.

Since the pay for the fourth and fifth contract years are less than the other years, Cutler will be such a catch during those years. The deal assures three years for Cutler, but if he doesn’t play the way the Bears want him to, we may be seeing the man play for another team in 2017!

Only time can tell; we wish the man the best in his career.